Orvieto Wine Region: A Guide to the Wines of Umbria

Orvieto Wine Region: A Guide to the Wines of Umbria

Italy’s central region is synonymous with wine country, but Umbria’s crowning jewel is its Orvieto wine. This savory variety accounts for 80% of the region’s vineyards.

If you’re traveling to Rome, you’ll want to take a break from the fast-paced city life and explore the heart of Italian wine country. Here’s your guide to getting the most from your journey to Umbria and Orvieto wineries:

The Story Behind Orvieto Wine

The name Orvieto refers to two meanings: the first being the white wine produced in the Umbria and Lazio areas, made primarily from a blend of Trebbiano and Grechetto. And the second refers to the region where the wines are produced.

The region itself straddles the border of Umbria and Lazio, areas known for their rich wine history and culture. The area is prime for grape growing, given its location near the former Latium volcano and its nutrient-rich soil.

The region’s wine history dates back to the Middle Ages. Back then, Orvieto was a sweet, golden-colored dessert wine. Producers would introduce the noble rot Botrytis cinerea to the wine after harvest before packing the wine into crates for storage. The wine rested in carved-out cave-like cellars to ferment.

Today’s blend provides a dry, semi-sweet flavor and is typically produced in small batches to preserve quality and taste. Along with a majority of Trebbiano and Grechetto, Drupeggio, Malvasia, Canaiolo bianco, and Verdello grapes are often blended in. Sweeter varieties of Orvieto typically have a higher concentration of Grechetto, which is known for its fruitiness and weight.

Some modern producers of Orvieto wine have begun experimenting with other grape varieties allowed by the DOC blending policy, such as Riesling and Sauvignon blanc. In addition, red varietals under the name Rosso Orveitano are also common. These use a blend of Barbera, Cabernet Sauvignon, Cabernet Franc, Pinot nero, Dolcetto, Merlot, and others.

For the best flavor and quality, you’ll want to head to a classico zone within the Orvieto viticulture area. Here you’ll find traditional Orvieto wine (near the town of Orvieto itself) for the most authentic experience.

Though Orvieto is tucked away from most of the rest of Umbria, you shouldn’t let its remoteness stop you from taking in all its sights.

On your journey from Rome, you’ll travel through Orte, a cliffside town in the Tiber valley. The ancient town of Magliano Sabina is also a likely spot on the drive, offering close proximity to travelways but with an idyllic, countryside vibe. You’ll also pass by Baschi, a monolithic, medieval postcard city that looks almost too perfect to be real.

Each of these areas is worth exploring on your own after your wine tasting mission in Orvieto. Consider planning your own escape to soak in their history, architecture, and beauty. 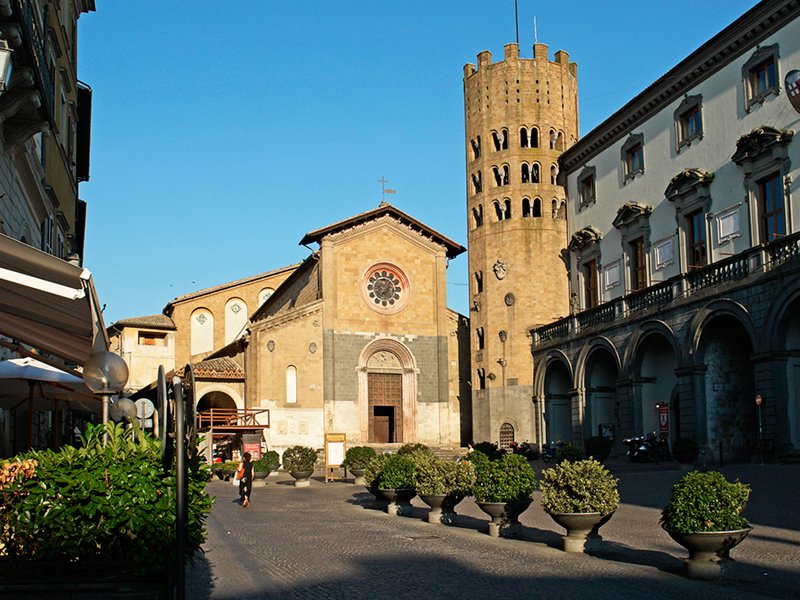 The rolling hills of Umbria are truly a sight to behold. Experience the region in the best possible way by booking a wine tour day trip.

We travel directly to the tiny Orvieto, a town that’s just as much a museum as it is a wine village. The town retains much of its old-world charm, from cobbled streets to architectural wonders and artistic sculptures. A stop at a local winery, complete with traditional Umbrian fare and the area’s famous wine varietals create memories that will last a lifetime.

Contact us today to check availability and reserve your spot for a tour of a lifetime.