Castles of Lazio region: itineraries for all tastes the hidden gem of Torre in Pietra

This space is dedicated to you! We conceived it to share our love for our country, Italy, as well as travelling creating great memories. You’ll find plenty of ideas on where to eat, where to wine tasting along with stories of people and territories we know and wish you to get to know.

On this first article we thought to tell you about some of the castles of Lazio Region. Castles are always fascinating for the history they holds and nowadays are still an ideal trip to take for families or couples travelling both in Italy and worldwide.
We think of the Castles in the Loira Valley in France, or the ones in Scotland for example, but Italy has stunning castles too and in Lazio Region you could be impressed by many.

Castel Sant’Angelo in Rome is world famous for being one of the city’s landmarks for example ,but just outside the city , within short rides are few gems worth to visit. Castello Caetani located in Sermoneta holds stunning Ninfa Gardens ; Castello Orsini Odescalchi in Bracciano is a treasure and today is a top wedding venue for celebrities.

Castello of Torre Alfina is also remarkable being Alfina awarded as one of the most beautiful villages in Italy and Castello Falconieri of Torrimpietra, once owned by a Pope , is an hidden gem of the Roman Countryside.

We thought to tell you about this last Castle because it’s the closest to Rome and also close to our hearts because we’ve grown up here , in the countryside among simple people and genuine products.
Story has it that a fortified village with watchtowers, moat and walls testifies the medieval origins of the Castle. In 1254 it was mentioned among the possessions of the noble Normanni Alberteschi family, then through the centuries it passed into the hands of noble families such as Anguillara’s, the Peretti’s of POPE SISTO Vth and the Falconieri’s.
In 1926 it became the property of Senator Luigi Albertini who, forced to leave his newspaper Corriere della Sera because in conflict with Fascism, invested a large part of the liquidation in the purchase of the estate transforming it into a model farm. The modern Torre in Pietra stands out above all for the breeding of dairy cattle and the production of wine. Wine was produced here since 1500’s but today in organic way.
Organic farming was embraced by the actual owners in 2000 out of respect of the territory. 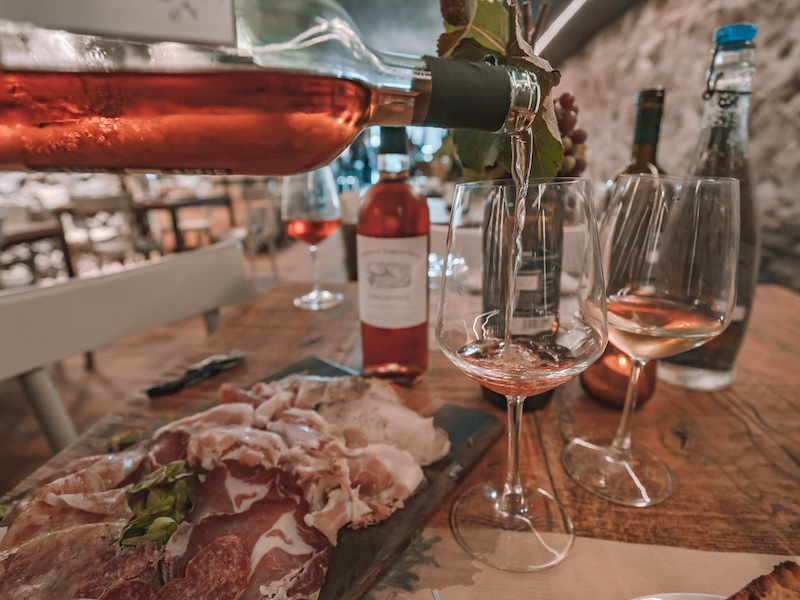 Moving to organic agriculture was not easy choice but the desire to protect the territory and produce natural and genuine wines was stronger.

Genetically modified organisms or chemical additives (herbicides, pesticides or insecticides) were abandoned the use of sulfur dioxide limited as much as possible.
Highest attention to the different needs of each vineyard and prevention was the weapon to defend the grapes that are officially certified.
The 11 wines produced reflect then perfectly the territory and some of them are part of the Roma DOC appellation.

We recommend a visit to this estate to enjoy the art ( The frescoes of Ghezzi celebrating the visit of Pope Benedict XVIII ) the wines, the food of the Osteria dell’Elefante , located inside the wine cellar and the warm welcoming of the people working there.